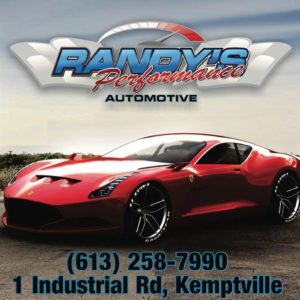 Randy’s was established in Kemptville by Randy Urslak in 1994.  For 23 years Randy has been the proud owner of an automotive shop that has become a local favorite for its honest, professional and friendly service. Randy has a love of drag racing and it has been a big part of the company from the very beginning. He loves the high performance cars and the hot rods and we sure have a lot of customers bringing their hot rods to us for engine building, custom exhausts, custom fabrication and more. Randy also has a love for firefighting and has been a firefighter since 1999. He worked his way up to become the deputy fire chief at the Kemptville Fire Department in July 2015.

When the Deputy Chief position opened, Randy started to evaluate if it would be a good time for a change. He applied, got the position at the Fire department, and told his employees that the opportunity of purchasing the business was available.  Richard McKenney showed interest right away. Richard has been working at Randy’s for the past 10 years and he always wanted to work for himself one day, so this was a win-win situation. Randy knew that the shop would be in great hands and Richard worked really hard to make this happen. Richard became the owner of Randy’s Performance Automotive on May 1st, 2017.

Randy's Performance Automotive
4.7
Based on 23 reviews

Chuck Yates
02:51 08 Oct 21
Awesome job as always, folks. These guys are honest and they know their stuff. Highly recommended!

Bill Goldsmith
19:22 14 Jul 21
His name is not Randy it's Steve. Really knows his stuff. His prices are in line or better. Been there a bunch of times.

Bob Seely
16:52 29 Jun 21
Friendly expert service. I've been going there for 20 years and have always been treated honestly and respectfully.

Jake Smit
21:20 08 Dec 20
Great place to get work done. They replaced the engine on my focus ST and were very knowledgeable and respectful,... vehicle was just as clean when it came out as when it went in. They kept me informed on the things that were going on and any problems they ran into, even sourced a new clutch for a really good price as mine was shot. Can't recommend these guys anymore and I encourage everyone to bring their cars here. They took care of my baby and I couldn't be happier with the service!read more

Moe Symons
13:19 20 Sep 19
Honest people. Very fair prices. They did a great job on a custom exhaust job for me. Highly recommended.

Rebecca Mcfarlane
02:23 20 Feb 18
Went to get a diagnosis on my car since there is a light on. Going this week to have them fix it. Price is fair

Robert Poole
23:23 01 Nov 17
I've been going to Randys for 10+ years. They are our most trusted mechanic. My father and kids also take their cars... to Randys. Steve, Ron, Richard, Randy and Ellen are great people and provide excellent service. Over the years the Team at Randy's has serviced 9 of our cars and 1 motorhome and only fix what needs to be fixed but also provide reliable estimates and recommendations for what will likely need to be fixed in the future. We trust them to keep our cars running and operating safely. I recommend Randys to all local friends.read more

Judi McGregor
20:15 25 Aug 17
Honest reliable service. I never have to worry about being scammed. The staff will help you with anything you need. New... or older car.read more
Next Reviews
Post a review: https://g.page/randysperformanceautomotive/review